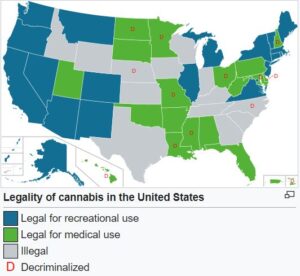 The legality of cannabis by U.S. jurisdiction

It’s interesting to see how each state addresses its cannabis position. Indiana lawmakers seemed to be confused on cannabis legalization.

As reported by Brandon Smith of Indiana Public Broadcasting Stations

In the US, the use of cannabis is illegal under federal law for any purpose.  The CSA, Controlled Substances Act, of 1970 classifies cannabis as a Schedule 1 substance, determined to have a high potential for abuse and no accepted medical use – thereby prohibiting even medical use of the drug.

The Indiana legislature has been more seriously considering marijuana legalization for about 4 years. The debate over that period hasn’t fundamentally changed.

After 4 hours of public testimony, much of it conflicting, Indiana lawmakers appear no closer to deciding whether to legalize cannabis.

The legislature has been examining the subject for about four years. And the testimony in a legislative study committee this week didn’t differ much from what lawmakers have heard before.

Katie Wiley is the chief legal officer for Stash Ventures, the parent company for cannabis growers and sellers in Michigan. She said that as a mother, she wants legal and regulated cannabis to help prevent an unregulated black market.

Many in Indiana feel Eli Lilly and Roach has a lot to do with the delay of legalization.

Interestingly enough, you can buy hemp-based THC legally in Indiana through the loophole in the most recent farm bill. So in a way, THC is legal and illegal in Indiana. Indiana lawmakers are confused on cannabis legalization like many of their residents.

Indiana Public Broadcasting Stations (IPBS) is a not-for-profit association of nine NPR radio stations and eight PBS television stations that serve as trusted resources for news, educational programming, and entertainment.  IPBS member stations work together to deliver free and accessible programming over the air, online, and in person. They reach 95% of Indiana’s population and more than 2.5 million Hoosiers consume IPBS programming on a weekly basis.

Green Forest Brands assists consumer package good companies to create healthy and unique products through a leading-technology infusion called Deeper Green™. The Deeper Green product is a true water-soluble cannabinoid and terpene infusion technology, it delivers precise doses, offers high bioavailability, and can be dialed in to be completely odorless and tasteless.

Manufacturers enjoy using Deeper Green™ because it is easy to use and doesn’t require special handling in order to infuse a product.

For more information, >>connect with the team.<<