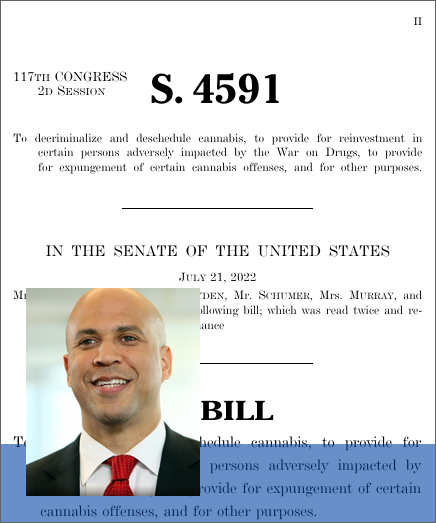 Legislation Update – The Cannabis Administration and Opportunity Act (S.4591 / CAOA) recognizes the legalization of cannabis by the states.

THC from 0.3% to 0.7% – The CAOA cannabis bill now before the U.S. Senate would establish the legality of all forms of THC naturally present in hemp, adding varieties, and then raise the overall limit for THC in hemp plants from 0.3% to 0.7%.

The Cannabis Administration and Opportunity Act is a broad legislative initiative to decriminalize cannabis by removing it from the Controlled Substances Act and empowering states to create their own cannabis laws.

The 163-page bill covers a wide range of cannabis issues with the aim of:

WHY IT IS IMPORTANT

This bill has a 3% chance of being enacted.

Predictions are by Skopos Labs.

SUMMARY OF THE CANNABIS ADMINISTRATION AND OPPORTUNITY ACT

Americans have made their voices heard across the country, through their ballot boxes, their legislatures and with their dollars: the War on Drugs has failed, and it’s time for lawmakers in Washington to respect the rights of states that have chosen to legalize cannabis.

Nearly all Americans live in a state with some form of legal cannabis. Nineteen states have legalized adult use of cannabis, reaching over 40 percent of Americans. Another 38 states have medical cannabis programs. An overwhelming majority of American adults, 91 percent, believe that cannabis should be legal for either adult or medical use.

The cannabis industry, largely made up of small businesses, employs nearly 430,000 workers, and generated over $25 billion in sales in 2021–presents a significant opportunity for entrepreneurship and economic empowerment. By 2025, it is estimated that the cannabis industry could exceed $45 billion in annual sales.

>>Go to the full summary of the COCA doc<<

>>Cory Booker’s Overview on the CAOA<<

>>Wikipedia overview of the Cannabis Administration and Opportunity Act<<

To discuss your next project, click here to connect with Green Forest Brand.